I recently got back from a 10 day trip to China where I visited the main cities of Beijing, Shanghai and Hong Kong. I had a really great time although I haven’t finished organizing and tagging all my photos and hope to get that done soon before I forget all the finer details of where each photo was taken. As I go through notes and photos I’ll be adding some thoughts to this “China Diary” over the next couple of months.

People have been asking me if I went to China for work or pleasure. In many eastern religions and philosophies lies the belief that all things are inter-related, which is referred to as non-duality. So while I went to China strictly for pleasure, it has certainly affected how I see the work that I do as as a personal historian as well as many other areas of my life. It was a profound trip for me; the first time I’ve been to an Asian culture, and I found the juxtaposition between our cultures fascinating.

My work as a personal historian and video biographer often finds me connecting generations through history. It’s not unusual for me to hear, “how did you get that story our of my (father)? ” or ” I’ve never heard that before.” I suppose part of the problem is that in families, we get to ‘know’ people so well that we stop listening. And part of it is that as we get older, we often think our children won’t be interested in our stories or it will occur as bragging, or a variety of other reasons that family and personal stories don’t get passed down.

While in China I heard a lot of stories about the histories of emperors and the dynasties, but nothing of the common man, although he (and she) is greatly depicted in artwork. 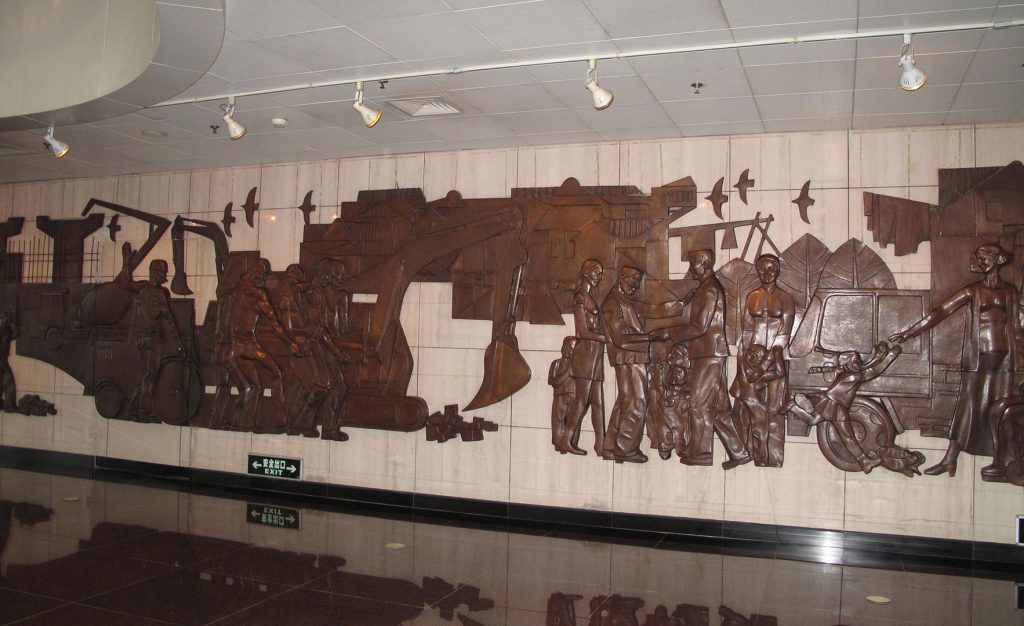 Here is a photo of a wall relief at the Shanghai Urban Planning Center that depicts the Chinese workers building the country.

I suppose that is normal for a tourist not to really get to know personal details, you don’t have the opportunity to get into people’s daily lives and talk to them about who they are, who their ancestors are and what they did. We had three guides over in China and all were wonderful but very professional and careful about what they told us regarding their own personal feelings and experiences.

I learned that the Chinese are very family focused and have deeply rooted beliefs in their deceased ancestors that are complexly intertwined with religion, superstition and folklore.

I suspect that their culture has been one of orally passing down the stories from one generation to another and in some cases, those stories managed to get written down in family tablets. Similar to how it was in the US before our family culture began to experience fracture as family members moved away in search of work and a better life. I suspect this too may be happening in China but didn’t have enough time there to find out.In Taoist religion, one of two main religions in China, spirits of departed ancestors are celebrated by putting photos of them on personal or temple alters. This article on Chinese Beliefs describes in length, the complicated rituals of caring for the departed spirits.

With degrees in design, psychology, and social work, Founder of Legacy Multimedia, Stefani Twyford, brings a multi-faceted tool belt to help her clients craft stories and share their memories.

Email info@legacymultimedia.com or complete this quick form and we’ll get back with you right away.